It’s been over twenty-five years since the original Star Trek television series debuted on network television – and today, the universe first seen in that show is more popular than ever. Star Trek VI: The Undiscovered Country was a huge box-office hit, and Star Trek: The Next Generation is now entering its sixth incredible season as the most popular hour of syndicated entertainment on television.

Now comes Deep Space Nine, a thrilling new addition to the Star Trek universe. Commanded by an embittered Starfleet officer and populated by a myriad of exotic aliens, the mysterious space station known as Deep Space Nine hovers on the edge of a wormhole, a doorway that leads to the galaxy’s farthest reaches – and beyond…

Commander Benjamin Sisko is just recovering from the death of his wife when he is assigned command over the former Cardassian, but new Federation space station, Deep Space 9. This space station is strategically located not only because of its orbit about Bajor, but also because of its proximity to the only known stable wormhole in the galaxy. After meeting the other Bajoran and Starfleet personnel assigned to the station, including a former Bajoran freedom fighter and a shapeshifter, Sisko finds himself in that very wormhole and in the midst of a metaphysical experience as the alien inhabitants of the wormhole question the concepts of time and love. Sisko, filled with humanistic hubris, begins to explain these experiences, and resolve his painful past. 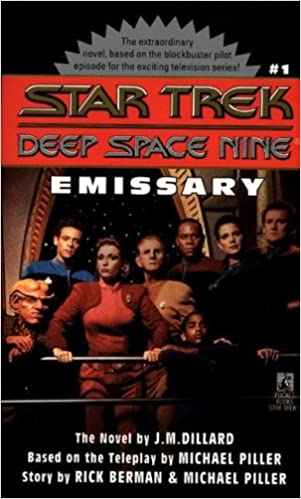